You have 0 Documents collected. Go to My Documents

5 stadiums for the football world championship in Brazil have been equipped with HAURATON drainage technology. HAURATON channels already offer a proper drainage in stadiums and arenas at many global sporting events.

The designers of five different stadiums were particularly impressed by the PP channels from the drainage specialist and have installed them in their projects. These are the national stadium Estádio Nacional in Brasilia, the Estádio Jornalista Mário Filho – better known as the Maracanã Stadium –, the Arena Corinthians in Itaquera, São Paulo, the Grêmio multifunctional arena in Porto Alegre and the Arena Amazônia in Manaus. The challenges: As well as looking after drainage, the channels also have to be aesthetically appealing. The materials must be weather-resistant, corrosion-resistant and insensitive to solar radiation for a long time. A non-slip and pedestrian-friendly surface is also required for the large numbers of visitors to the World Cup stadiums.

The Arena Corinthians in Itaquera, a district of the Brazilian metropolis of São Paulo, is the venue for the opening game of the 2014 World Cup. It can accommodate about 68,000 spectators. The RECYFIX PLUS drainage system has been used here, a PP channel system with steel top edges. Ductile iron gratings for load classes C 250 and D 400 have been installed as gratings. In the arena, the channels drain the access areas, the stands, the pitch and the areas adjacent to the pitch. Lea Alves, Project Manager from the Odebrecht company for the Corinthians Arena, explains the criteria that were extremely important to the construction company and the reason why they decided to use HAURATON drainage. "The drainage channels had to fulfil some extremely specific requirements for use in the Arena Corinthians. Quick delivery of the materials was extremely important during product selection, as were ease of installation and outstanding drainage reliability", emphasises Alves. "And not least, the costs and the well-engineered technology also play an important part". The success of our projects is based on a solid and reliable partnership, which is the case with HAURATON".

RECYFIX PLUS and RECYFIX STANDARD channels were also installed in the Arena Amazônia. The stadium in the city of Manaus is a classical football stadium that can accommodate 44,310 visitors. The Arena, which will be the venue for four World Cup matches, was designed by Architect office GMP. The channels for draining the pitch separate the natural turf playing surface from areas covered with artificial turf. Special feature: with the RECYFIX system, HAURATON is using channels with extremely high hydraulic performance, which will reliably withstand the large quantities of precipitation in the moist tropical climate of the Brazilian state of Amazonas.

The Estádio Nacional de Brasília was a venue for the FIFA ConFed Cup 2013, and was built on the remnants of the Estádio Mané Garrincha, an old multi-purpose stadium that was demolished in 2010. Almost 1400 metres of RECYFIX STANDARD channels with galvanised mesh gratings were installed in and around the stadium. In order to make the grating extremely pedestrian friendly, a narrow mesh size of 30 x 10 mm was chosen. The channels provide reliable surface drainage in the stands of the stadium and in important access areas. 400 metres of RECYFIX PRO 100 channels made of PP with GUGI-gratings made of PA-GF have been used. The construction companies were impressed with the simple system with which the ultra-light and shatter-proof channels were laid. Particular advantage: The PA-GF grating keeps its appearance over the long term. The material of the gratings and also the channels is free of corrosion and rust. They are characterised by being extremely durable and have a permanently elegant appearance. The national stadium can accommodate 70,064 spectators and will be the second-biggest stadium at the World Cup 2014.

Drainage systems from HAURATON are also being used in the Estádio Jornalista Mário Filho in Rio de Janeiro, better known as the Maracanã Stadium. The corrosion-free RECYFIX PRO channel system has been installed here. Almost 400 metres of the channels with GUGI-gratings made of PA-GFdrains large sections of the stands. Areas that have to withstand greater loads have been equipped with 400 metres of the RECYFIX PLUS X 300 channels with a ductile iron grating. The system is characterised by the robust and shatter-proof channel body with metal top edges. The nominal width of 300 mm provides a considerable retention volume. The Maracanã stadium will be the venue for the final of the 2014 World Cup. It is the biggest stadium in the South American country, and can accommodate 73,531 spectators.

The Arena von Grêmio is a multi-functional stadium in the city of Porto Alegre. Here too, reliable and efficient pitch drainage is provided by the RECYFIX PRO system. Like all products in the RECYFIX systems, these channels have some decisive advantages: They are light, essentially shatter-proof, easy to work with and 100% recyclable. The built-in channels are extremely robust, UV-resistant and ideal for heavily frequented areas. 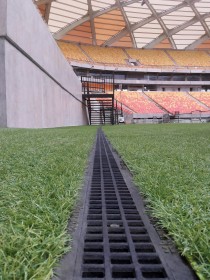 RECYFIX Channels in the service area next to the pitch 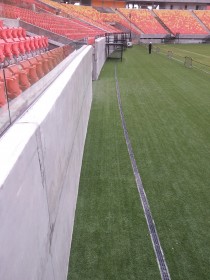 Drainage in the Arena Amazonia. 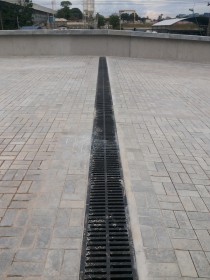 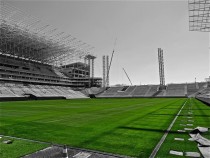 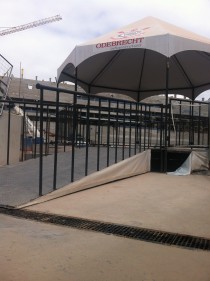